Scott Morrison’s “work harder to earn more” invokes the conservative notion that prosperity under capitalism is fundamentally about hard work. This is a bogus position given 40% of society’s income goes to capital – work-free reward that disproportionately benefits the top 1%. Capital’s income share has doubled in recent decades and this trend shows no sign of abating. Innovative policy is needed to prevent a future of insurmountable inequality that would be an existential challenge for functional democracy.

Emma Dawson has a good piece in the Guardian demolishing Scott Morrison’s suggestion that people doing it tough just need to work harder.

Of course the connection between hard work and wealth is tenuous at best. A worker’s compensation depends not only or even primarily on how long and intensely they work, but also by the value the market puts on their occupation. Aged care workers have a brutal job, but no matter how hard they work they are unlikely to earn as much as a well-connected elite who sits on some boards, working a few dozen days a year.

Further, these market values can have little connection to what’s good for society. Does anyone seriously believe society needs aged care workers and research scientists less than bankers and corporate lawyers? Less than tobacco executives?

We need some bankers to provide the credit and investment a modern economy needs to function, and we need some lawyers for a functioning rule of law. But at the margin bankers and lawyers don’t produce any new output at the societal level, they just rent-seek: manipulating the system to capture and redistribute existing output. Both the IMF and the OECD have said that the financial sector in advanced economies has become too big. Society should be dissuading, not encouraging, workers into this sector. In the case of tobacco executives, the societal harm is self-evident. Job success for these folks means getting people addicted to something that will kill them.

But there is, I contend, a more fundamental critique to be made. The elephant in the room in discussion about work and inequality under capitalism is that a large share of society’s income is awarded for no work at all. Indeed this work-free income is at the heart of capitalism. Literally it is capital income.

Roughly two-fifths of the national income is capital income – obtained for ownership, not work –  including dividends, rent and interest. Even this is likely to be an underestimate, as it excludes income from unincorporated businesses. (Income from businesses like sole traders is a fudge of both labour and capital income, so the ABS categorises it separately as “gross mixed income”.)

In large part, this is not some kind of perversion of capitalism; it is a natural and normal state of affairs under capitalism. As Piketty and others have argued, it appears to be capital income, rather than inequality in labour income, that drives long-run growth in inequality. Capital income is far more unequally distributed than labour income, so any shift in favour of the former will increase overall inequality. If Piketty’s central thesis is right, growth in capital share will continue indefinitely. Branko Milanovic calls this a “quasi-inevitable trend to higher interpersonal inequality that rich countries will face if capital share in GDP keeps on rising – as many economists assure us it will”. The depressing implication is that barring a massive structural shock such as world war, revolution or other policy upheaval, we are headed towards “patrimonial capitalism”. This back-to-the-future society will exhibit Victorian Era levels of inequality and have similarities to aristocracy. Such great disparities in societal power will undermine functional democracy.

Meanwhile, back in Australia. As the graph below shows, stand out drivers of the growth in capital share are financial sector profits and house prices. 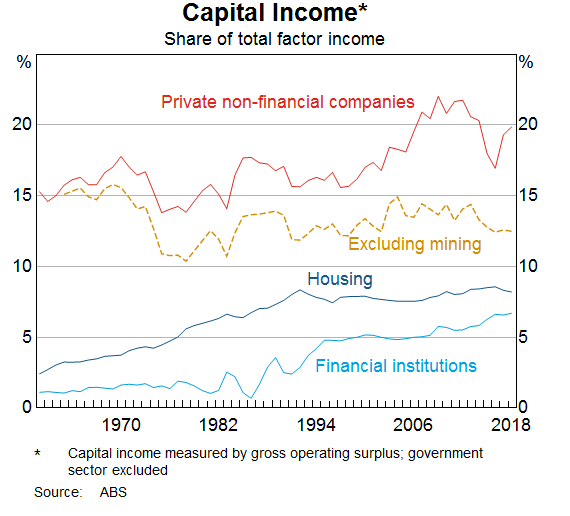 Although the top 1% and top 0.1% have gained the most from the rising capital share, some of the middle class has also benefited through appreciation in the value of their superannuation and particularly their homes. (Investment properties attract rental income, while the gains to owner occupied homes are reflected in the income statistics through rent imputation.)

Growth in housing prices is largely a zero-sum game as it harms families who do not own their own homes. These “losers” in the game must divert more of their wages to existing owners, whether they are renting or buying their first home. Over the past few decades, our society has thereby set up a massive reverse redistribution scheme, known as “the property market”, which redirects the proceeds of work and gives it to the owners of soil and buildings for no work at all. Through large taxation concessions for property investment, our conservative governments enthusiastically promote this anti-work redistribution scheme.

So a large share of prosperity in Australia – particularly for the top 1%, but also for the middle class – has nothing to do with work. It is simply ownership.

This is a hard fact for the centre-left to grapple with. Occupational inequality sounds more manageable a problem. Addressing capital income can seem like leaning against the fundamental trajectory of the economic system. You’re standing in front of a Mac Truck and trying to push back.

Consequently the mainstream left prefers simple and tangible targets like highly paid workers – CEOs, lawyers and bankers – even though the share of national income going to elite workers is much lower than the share going for no work at all.

Notwithstanding the difficulty in addressing capital, we should not bury our heads in the sand. We cannot pretend to understand – let alone address – the global growth in inequality if we ignore its major driver. This means venturing beyond the economic and political mainstream.

There are two ways to try to tackle the rising inequality associated with a growing capital share. One way is to try to pull the share of national income back to labour, the other way is to make capital income more equally distributed.

From the latter approach, the most conceptually sound proposal in my view is Matt Bruenig’s Social Wealth Fund for America. The idea would see the government construct a giant managed fund that buys up shares in the private sector through market transactions. The fund’s management would be modelled on Norwegian national wealth funds.

What is distinctive about Bruenig’s plan is that all adult citizens would each hold one share in the fund and receive regular dividend payments. It would be like a retail managed investment fund, but the proceeds would be equally distributed. The effect would be a kind of universal income. This approach to universal income circumvents the common objection that a universal income provides money without work. Bruenig’s scheme does not, in fact, invent any new unearned income; it simply makes the economy’s unearned capital income more evenly distributed.

According to data available from the World Inequality Database, the average adult in the Australian top 1% receives capital income that is more than triple the total average adult income from all sources. While everyone else is slogging away, they’re receiving triple the amount for doing squat. Let’s call it a UBI for the top 1%. If the capitalist class can have a UBI, why can’t everyone else? Bruenig: “If passive income is so destructive, then the income situation of the 1% surely is a national emergency!”

It’s a smart argument and a very elegant proposal. If we ever get socialism, Bruenig’s market socialism is how it should happen.

Unfortunately, the funds required for a meaningful dividend payment are eye-wateringly large. A fund of $1 trillion, with a dividend yield of 2.5%, would mean only around $1,290 per Australian adult. If the investment is not funded by new revenue, it would nearly triple the Australian government’s gross debt, which is currently $560 billion (although the fund could be configured to avoid increasing net debt). It would take in around a tenth of Australia’s national wealth, and would roughly double the government’s share of national wealth. Such an investment is financially risky and politically hard to imagine, for a payment rate that is hardly going to be a game changer for societal wellbeing. The more meaningful the payment, the more massive the investment required.

But we should be careful about dismissing possibilities out of hand. Today’s orthodoxy was of course yesterday’s radical heterodoxy and so on and so on. The scope of our present welfare state would seem unthinkable 80 years ago. In fact, the Norwegian government owns 59% of its national wealth –  76% if homes are excluded, largely through wealth funds. So we have a real life example of a massive, highly effective state investment scheme, proportionately far larger than the $1 trillion example above. This isn’t just about the oil fund either. Norway owns multiple funds and held 40% of the national wealth – four times the government share in Australia – before the oil fund was even established.

There will be no magic bullet for tackling the inequality brought about by rising capital share. We will need to consider a combination of multiple levers, such as establishing a social wealth fund, strengthening unions’ bargaining power, establishing wealth and inheritance taxation, broadening land taxation, promoting workers’ co-ops and reinvesting in public corporations (even nationalising firms embroiled in extreme misconduct). Ending the obsession with privatising profitable assets and not proceeding with company tax cuts are straightforward proposals. International cooperation to impose higher company taxes should also be prioritised. On the success side, compulsory superannuation has meant that capital income is less concentrated to the top than it otherwise would have been.

On a rhetorical level, it is vital that social democrats tackle conservative myths about work and prosperity under capitalism. There is an obsession with the rhetoric of work when it comes to the welfare state; social security is considered to be tainted, chronically under suspicion for providing unearned income; recipients are expected to go to extreme lengths to prove they are working or trying to work. The government maintains a wasteful surveillance bureaucracy attempting to shove everyone into labour – paid or unpaid, appropriate or inappropriate, safe or unsafe. There is an ideology of work.

This ideology seems positively goofy in an economy that delivers nearly 40% of its rewards as unearned income. The ideology of work holds only for the weak, for the workers.

For the powerful, unearned income is not some kind of perversion of authentic capitalism. It is the point of it.

The time has come to challenge sit down money for the capitalist class.

1 thought on “Sit down money for the capitalist class”